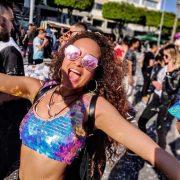 Is it ever a good idea to drunk text the guy you went on a date with the night before and invite him last minute to a gig around the corner from his house? Yes or no? Asking for a friend…

I spend a lot of my time accidentally at the Windmill Brixton, not to say I don’t enjoy my time there, quite the contrary, I just never plan to be there, it’s like taking a delightful tumble into the unknown and always being better for it.

It was a Saturday night and I had received the familiar text from my pals summoning me to Brixton for pints and good music. As soon as I stepped through the door and ordered my usual cider from the bar, I ventured into the edges of the crowd.

If you’re an avid reader of No Taste, you may already know that being 5”2 doesn’t always lend itself to being at the back of large groups of people, but I was hopeful. I managed to find a place to rest my pint and a gap in the crowd big enough to just make out the lead singer.

My friends were all outside in the smoking shed but I didn’t want to miss the music, I would find out later that it was Modern Woman playing. My ears were met with a Kate Bush/female Morrissey vocal, folky and ethereal, delicate but powerful. Married with a sporadic sprinkling of violin, saxophone and other-worldly soundbites coming from the stage, I was hooked.

During one song the intricate rhythm section ft. cowbell had the audience swaying along, much like that scene in the Simpsons, where cool teens are dancing at Homerpalooza. Fingers crossed that this reference isn’t as obscure as it sounds and in fact, you are now nodding your head in agreement. I’m not sure if it’s a requirement at The Windmill but almost every person, perhaps excluding myself, exudes such a defiance for cool and what is cool… that they ultimately embody the very essence of ‘cool’ itself. It’s a vibe.

It wasn’t until the penultimate song that my ears began to twitch and the twiddly, fiddly loveliness that is mathrock began to echo in some of their riffs. It’s the kinda sound that makes me screw up my face like I’m in a Rihanna video, as the zealous appreciation for the sounds that have reached my ears makes it difficult to control facial movements. It made me think of The Orchards, but perhaps grungier. I’ve also decided that I’d really want to see Modern Woman on tour with a band I know from home called Fes. Make it happen guys.

The last song is a spoken word piece performed over guitar riffs, reminding me of The Mansion Song by Kate Nash, a more accurate portrayal perhaps of the artist and a giant middle finger to her debut pop singles, (Fuck YES), then the bass player comes in and I’m in heaven. The changing time signatures made me grin from ear to ear and their departing words ‘That’s It’ as the music grinds to a halt made me exhale and think ‘Well that’s just fucking cool’.

Towards the end of the evening I saw a few of the band members meandering about and you’ll be happy to hear I was brave enough to say hello and not gush too much about how much I liked their music.

It was time to see my friends, an eclectic bunch of musicians, creatives and art school-goers with a penchant for lung pollution in the form of nicotine. I arrive at the smoking shed, I promise I’m trying to stop.

We all pile back inside once the headline act is about to come on, Wunderhorse.

I met the lead singer sometime last summer sat outside on a picnic bench in the Windmill smoking area, of course. It was late and cigarettes were being smoked whilst tales were shared across the group. I had until this evening never heard his band play and the whole crowd buzzed with excitement and anticipation for the music to start.

Cue tortured soul and angsty vocals and a tight nit band that would make anyone, including the gaggle of girls already at side stage (most probably girlfriends, friends and significant others, I promise I am not about to groupie shame, we’ve all been there), weak at the knees.

I hadn’t met or seen the lead singer since our first and last encounter but listening to his lyrics I felt like I already knew him. Honest songwriting partnered with a talented band made a headline act that had mini mosh pits stirring up from the depths of the audience.

The mosh pit starts to increase in its severity and numbers, as I stand on the fringes praying that no one bumps into me. I like the enthusiasm but dear god I think I’m too old for this shit. I go to the bar.

Earlier that evening my failed attempts to coerce yesterday’s date to join me somehow ended up with me sending a play-by-play account of the two bands I saw that evening. That accompanied by the plethora of videos I sent to encourage deep feelings of FOMO meant there was only one logical outcome…

He made me write this review.

So, what can we learn from this?

Always drunk text dates, even if they don’t end up hanging out with you, cause then you can tell them about what a great time you had without them TWICE.

I roamed Bristol drunk in search of live music

I roamed Bristol drunk in search of live music