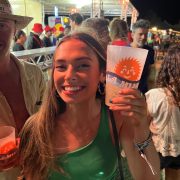 Taking Sam’s advice and writing this en route to Budapest. Although not quite 37,000 feet in the air, instead stranded on a runway delayed for two hours in Ryanair’s finest seems like the perfect place to think back to happier times…All Points East!!

The sun is shining, the people are happy and we head to Ray-Ban’s west stage to start our day at Freddie Gibbs. The friendly, enthusiastic crowd made this set a strong start to the day. “Crime Pays” was my favourite. The melodic 70s backing track with the smooth rap had the whole crowd vibing in conjunction like a wave to the beat.

Whilst en route to Mura Masa we were enticed into the north stage tent by Joy Orbison. We weren’t actually planning to see him but like subjects of the pied piper, we strolled in to experience the passionate house and garage numbers. We decided to stay until a less than great tune came on- which took another six tracks.

Finally, we made it over to the east stage for Mura Masa. He played more new songs that I didn’t know before but he got the crowd going nevertheless. The female singer he brought on stage was an incredible performer. Her energetic dancing and effortless riffs brought life to summer favourites like “Love$ick”

Fred again.. One of the acts that had me most excited for the day. “Have you seen that Boiler Room set from last month where a guy in the crowd accidentally cuts the track and he manages to pull it back into one of the most incredible drops of all time?” seemed to be the question on every partygoer’s tongue – have you? It is pretty good, isn’t it? With enough people to fill the main stage, we gathered under the far-too-small, billion degrees north stage tent – we were in for a journey.

It was banger after banger with dance hits such as “Turn on the Lights Again..”, “Billie (Loving arms)” and more emotive tracks like “Dermot (See yourself in my eyes)” and “Angie (I’ve Been Lost)”. Although not for the faint-hearted, the slimy slip of topless blokes making their way through wasn’t enough to stop us. Fred again.. told the crowd to get people up on their shoulders leading to a labyrinth of frenzied limbs. Being up there was euphoric and when they unleashed huge balls into the crowd it was what can only be described as carnage, in the best possible way!

Between playing the keyboard, singing and being an incredible front man there seems to be nothing Fred again.. can’t do. Not to mention the fact that he could probably mix water and oil. “Marea (we lost dancing)” had me reminiscing about getting pissed with my mates in my student house mid covid and all we wanted was the pubs to open. This was much better than the pub and, with not a mask in sight, and certainly no social distancing, it truly felt like a distant memory.

Then, the highlight of the show: “London make some noise for Mike fucking Skinner” (!!!!!) Followed by the familiar “Has it come to this?” and the crowd went wild. A sweaty mixing pot of people dancing in any way they can manage was the perfect end to this dreamlike set. The talent from this man is top tier and the fact that this time last year he hadn’t even played his first show is astounding. Now for the finale.

This was it. The masses made their way to the huge east stage for the headliners, Disclosure. A booming narrator speaking seemingly from the heavens gave the message, “This, the sound is love, it was always love, and it will always be love”. The white lights illuminated the thousands gathered and the heartbeat tempo of the 2013 bop “White Noise” steadily speeds up until all 40,000+ people are bouncing in synchrony.

The electronic duo treated us to countless hits such as “You’ve Got To Let Go If You Want To Be Free”,  “Holding on” and “Waterfall” and kept the energy sky high throughout. Suddenly the stage flashes red and the hypnotic beat of “When a Fire Starts to Burn” begins to blast. I’m hoisted onto someone’s shoulders (being 5ft occasionally has its perks) and for the first time, I see the magnitude of this infectious crowd. It’s impossible not to move your body when you hear this hit.

As the night is nearing an end, the eruption of the crowd alerts me to the fact that Sam Smith has joined the stage and the incredible “Latch” spreads its way through the park. The iconic melody along with Sam Smith’s angelic vocals was breathtaking. The strobe lights were flashing, fireworks lighting up Victoria park and people boogying like there was no tomorrow.

“We haven’t done that in 5 years” they shouted, and again, it was one of those moments where you realise the mayhem we’ve been living in the past few years and this felt like we’d finally received our reward.