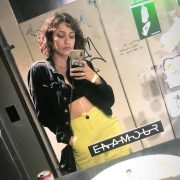 Back in 2013, LA-based project Rhye played their first ever live show at London’s intimate St-Giles in the Fields Church. Last week, they returned to London to finish off their European tour by nearly selling out the legendary Troxy music hall. Not only that, but it was lead musician Mike Milosh’s 46th birthday – which you’d never guess by his 21-year old demeanor and actual angel-like vocals, not to mention the confetti cannons that went off on stage halfway through the show.

These parallels were effortlessly brought to life at Troxy. Starting slowly and solemnly with “Please” sung acapella, the instrumentals patiently grew and Rhye began to blend the original’s soulful agony with the aura of Jeff Samuel’s disco remix. When the beat finally dropped, the whole crowd was dancing. Naturally, they moved on to “Last Dance.” This was electronic music brought to life, via Milosh’s otherworldly vocals and a vibing six-piece band (keys, guitar, bass, violin, cello, drums). By their 3rd song “Taste,” a fan favorite, we were all hooked. I looked around to see dreamy-eyed lovers swaying in unison, and others truly just dancing their asses off. One thing is for certain, Rhye’s the type of music that pulls you in, and naturally, as one audience member sighed, “makes you reach up and caress your neck.”

Solos by Keeter on the cello and Nikita on the violin were especially impressive. They went from orchestral elegance to hard rock to ear splitting delirium and back for a solid 3 minutes during “Softly,” with the cellist even picking up his instrument and playing it like a bass. Pat on the guitar had consistently gorgeous riffs, reminding us of the band’s California surf wave foundations. Dan on the keys and Ian on the drums had insane solos throughout, but particularly on the banger “Phoenix.” Milosh jumped from synth to percussion to glockenspiel and back to those angelic vocals, with lyrics you know were written from a passionate fight or heated night we can all relate to: “don’t give me that face…” and “I thought you’d love me til I’m raw.” Milosh jumped across albums from the last decade, but rooted the performance in their latest 2021 release “Home.” As the show carried on, “Helpless” reminded us that Rhye is the north star of LA’s current wave of RnB infused bedroom pop.

To conclude, Milosh asked the audience for silence, and bookended the show with a candle-light acapella version of their mega-hit “Open.” However, not without warning the crowd that “we don’t do encores, because we are pragmatic people. And they feel fake… but you do you boo!” While the show could have done with more interesting lighting and stage design, especially in an incredible venue like Troxy, Rhye’s ambient sounds did not fail to sweep us away. The last words Milosh left us with – “I fell in love” – had us walking away nostalgic for more.